Broadcast magazine has just published an article about our work: Chatty Man top for Twitter interaction. It is based on research carried out by David Ellis at station10 into the effectiveness of the @chattyman Twitter activity for Channel 4’s Alan Carr: Chatty Man.

Whilst we knew that the account was popular, with over 120,000 followers and plenty of conversation around the show, we were pleasantly surprised by David’s findings – namely that @chattyman outperforms larger ratings shows such as X-Factor and Million Pound Drop in terms of proportion of followers to TV audience numbers (at 6.6%, 1% and 0.5% respectively) and also “massively outperforms” them when it comes to positive sentiment. During each show in the last series there were between 500 and 700 tweets directed to @chattyman and even more using the #chattyman hashtag – which can make for some interesting challenges when it comes to managing the conversation and answering questions! 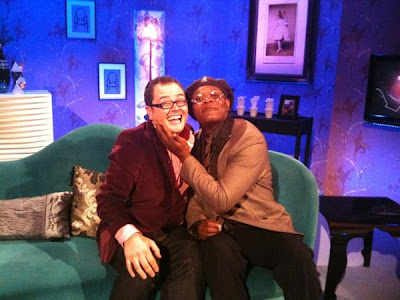 Alan Carr: Chatty Man was our very first Liberty842 project – started back in the early-ish Twitter days of 2009. It’s been fascinating to see the changing behaviour of followers. In 2009, working closely with Channel 4 and Open Mike Productions, we would rush to get a video of Alan uploaded onto the Channel 4 website and a link tweeted before people left work on a Friday afternoon. Today, there’s as much, if not more, Twitter activity at the weekends with many more interacting via smart phones and laptops from their sofas.

Our @chattyman project has coincided with the rise and rise of “event TV” where viewers watch and interact simultaneously. We have watched time contract to the point where the watercooler moment is happening as a show airs.

During the last (5th) series, conversations would start at 9pm in the run up to transmission at 10, then continue through the 4+1 broadcast and into the next morning when people would be buzzing with comment about the guests, the one-liners or Alan’s latest jacket/shoes/cocktail from the globe!

The @chattyman Twitter account has a strong customer service ethos with Sam answering as many questions as is humanly possible as well as responding to requests for insider info and extra original content – for example, fans have had the chance to ask Alan questions and get a personal video response. We often give viewers a peek behind the scenes with Alan’s impromptu tours of the studio on video, and photos from the set and green room.

The amount of work and attention required to nurture a successful Twitter account can’t be underestimated. We have found that the conversation continues when Alan Carr: Chatty Man is off air – people tweet suggestions for guests for the next series and ask about audience tickets as well as when the show will be back on air. Whilst this means extra work during the time when production teams and broadcasters would be working on other projects, it has had massive benefits for a show that is broadcast in series format.

If you’re interested in finding out more about what we do, or about the measurement research by station10, get in touch by emailing hello@liberty842.com or contact David Ellis at station10.