On Thursday 25 November, we joined the twitterati at the Golden Twit Awards. Some of @chattyman’s followers had nominated chattyman for a Golden Twit, and – once we’d retweeted the nomination – the votes came pouring in.

We certainly weren’t expecting to win anything, and we were chuffed to bits when @chattyman was handed the Live Broadcast Award by public vote. 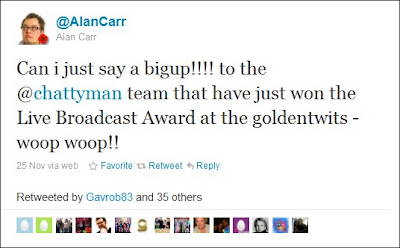 Alan sent his congrats as did many @chattyman followers. So a big well done to Sam who mans the chattyman Twitter feed and a huge thanks to Alan, Open Mike Productions and Channel 4 for all their support and laughs over the last four series, and now into a fifth.

We believe that Sam’s dedication and humour has endeared her to the 87,400 @chattyman followers (and counting). She’ll try and answer all the questions asked, and makes sure the fans get a sneak peek of upcoming guests with gossip and photos from the green room when the show is recording. She also tweets through the breaks between series and keeps the feed alive, ready for when the new series starts up again.

It was the perfect moment to crack open a bottle of Lambrini and pass round the Twiglets in true #chattyman style.

Thanks also go to Matt Rooney for his support on this project.