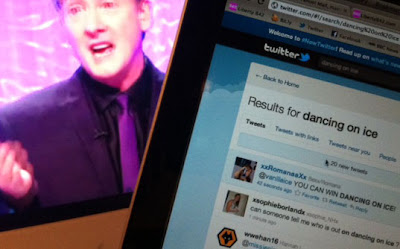 TV’s always going to be worth talking about – as we found out when we heard the findings from Thinkbox’s research into the future of telly this week.

We’ve managed the Twitter feed for Alan Carr: Chatty Man since the Channel 4 series started in 2009 so we know how much conversation a TV show can generate. However, we also know that viewer behaviour is constantly evolving so we were keen to hear about what lies ahead for TV – and that’s exactly what Thinkbox told us.

Tellyporting: Travelling to TV’s Near Future looked at how British audiences are making use of latest technology and how new services might affect – and enhance – their viewing experience.

The great news is that the research found plenty to be positive about.

For instance, the TV still seems to be the preferred device for watching full-length shows where picture and audio can be experienced at their best. It also tends to be the device that people watch with family and friends.

TV’s power to inspire conversation is as strong as it’s always been, though, of course, there are now many more places than just the water cooler for people to catch up with others about what they’re watching.

Rather than distracting viewers from what’s happening on telly, this two-screen viewing is adding to the experience of watching a show – and in many cases is encouraging audiences to watch programmes as they air so they can see them as they happen and be part of the resulting conversation.

With 37% of the sample saying they watch the TV and go online simultaneously every day, there’s huge potential to engage these people with additional content and services without losing them along the way.

Future developments in instant-response technology through the TV can only build on this, enabling broadcasters, programme makers and advertisers to connect with audiences while listening to and learning from what they have to say.

Which technologies lead the way remains to be seen so the only thing we can be sure of at this stage is that the TV’s here to stay – and it’ll continue to be a talking point for many years to come.

Liberty842 © 2019 All Rights Reserved - Privacy Policy
You can login using your social profile
Problem with login?
We use cookies to ensure that we give you the best experience on our website. If you continue to use this site we will assume that you are happy with it.Ok