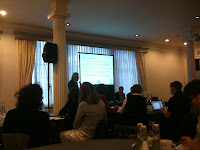 On Monday 31st of January the Libery842 team attended a seminar held at the RSA. The seminar was set up to discuss new approaches to community regeneration. Attendees came from a variety of professional backgrounds to discuss how we can rebuild social networks, both on and offline. The hope is that by doing so we can reach out to the edges of society and empower the most isolated. It was quite a task to be set at 8.30 on a Monday morning, however, fueled heavily on coffee and croissants, we rolled up our sleeves and got stuck in.

Around the large tables sat a broad spectrum of experiences. Each group was given marker pens, post-it notes and A3 sheets of paper and asked to throw around ideas on developing and rebuilding relationships within a community. We rummaged through our personal toolboxes of experience and attempted to tackle this mammoth task.

Language, we all agreed is key to connecting people and since this was the case we needed to decide on easily accessible vocabulary and terminology. (It was felt that the term ‘mental heath’, for example, was far too broad and could stigmatise people – and that using more specific terms would have more relevance). It was also pointed out that language used needs to adapt to reach each community with their own set of terms and definitions.

One of the project’s aims is “to inform the policies and practices required to power and sustain the Big Society”. However it was thought that the true definition of the Big Society was not clear and therefore it was key to explore exactly what it means and how public services might be affected by any changes (as there are many isolated members of society that depend upon them). The Connected Communities initiative is trying to avoid a top-down approach to the issues they intend to tackle. As the speakers Professor David Morris and Steve Broome explained, The Connected Communities report calls for innovative solutions to local problems and local collaboration to enhance mental well-being for all. They also discussed the role of public services and if those roles can be strengthened, redefined or even reduced if better social networks are put in place.

One attendee suggested that perhaps the caring professions had a lot to “un-learn” when it came to interacting with patients. He put forward the idea that professionalism had taken over and value systems were being imposed upon communities that never really belonged to them in the first place. Public services were seen as somewhat to blame here, at times, treating the people that needed individual support more like boxes that needed to be ticked. The term “un-learning” was adopted quickly by the seminars attendees, becoming it seemed, the first addition to the group’s glossary of shared language.

Over the years, technology has fundamentally changed the way we do business – in the way we connect, communicate and build relationships. We discussed how digital solutions could be applied to help those that are most isolated within society. Although there are still many corners that the World Wide Web does not reach, it was thought that by using technology that people do have (like mobile phones, which have 130% penetration in Western Europe) would be a good place to start.

It seems as though there are still many things we must “un-learn”, many ticked boxes to reassess. However by using language that people understand, and technology that does not require new learning and is already accessible, then perhaps we could start to join those first few disconnected dots.

Liberty842 © 2019 All Rights Reserved - Privacy Policy
You can login using your social profile
Problem with login?
We use cookies to ensure that we give you the best experience on our website. If you continue to use this site we will assume that you are happy with it.Ok